In the run-up to the eagerly anticipated club finals, two friendly matches were played. First, away to Goring Manor on 14/09. We play our much-respected neighbours many times each season, so it practically feels like a home match. And on two of the rinks the Marine players certainly did make themselves at home, winning comfortably by 19 shots to 15 and by 20 shots to 14, respectively.

The winning skips were Dennis Martin, with keen support from Gerry Perch and Leon White; and skip Ivan Godsmark, backed up by Bob Cole and Terry Ashley. However, home skip Frank Tsang obviously missed the memo about being nice to the visitors, as he powered to a ruthless win of 27 shots to 3 against Marine’s Mike Hitchin.

Mike Hitchin lost by 27 shots to 3

After the reversal at Goring Manor it was important to get back to winning ways, and thankfully Marine did just that on 21/09 in a home clash against visitors Maltravers of Littlehampton. Skip Ivan Godsmark enjoyed sterling support from David Hughes and Terry Ashley, winning by 17 shots to 8 after being ahead pretty much throughout.

It was also a win for skip Mike Hitchin, with lion-hearted support from Steve Davis and Shaun Coppard. Locked on 16 shots apiece with the visitors, the home side held their nerve, collected 4 shots on the final end and snared a win by 20 shots to 16.

Finally, Bob Cole, Alan Paterson and skip Leon White enjoyed a close battle all afternoon, going into the last end they had their collective noses 1 shot in front. But here Maltravers bagged 1 shot and a well-deserved draw. For Marine it was an overall win; only the second of the summer and so enjoyed even more for the rarity value!

The first day of Marine’s club finals began with lowering skies and squally showers; sadly, a theme which prevailed throughout. However, that did not deter the enthusiastic finalists who gathered to play four matches across two sessions; with 10am and 1pm starts.

First up was the 2-wood yardstick. Played over 21 ends maximum only bowls within a yard of the jack counted, 2 bowls per player per end. 93-year-old Len Tebby; proud owner of a full England cap for bowls and with two excellent wins en route to the final, was ranged against last year’s winner Terry Urben.

Both players struggled initially with a sluggish green, with Tebby finding some particularly good lines, if not quite the length needed. In the end brawn won out over class and experience, with Urben winning by 13 shots to 1 in 16 completed ends.

At the same time, the Handicap Singles was underway; Ivan Godsmark starting on minus 6 against Harry Smith; the first to 18 being the winner. It is never easy with a handicap; essential to dispose of it quickly and get on level terms. Godsmark achieved that goal after 6 ends and then collected a maximum of 4 shots to move into the lead by 5 shots to 1.

Despite the best efforts of Smith, the always dangerous Godsmark was not to be denied and he deservedly won by 18 shots to 5 from 17 completed ends.

After a swift lunch, the afternoon session began at 1pm and some heavy rain made bowling tricky, and life uncomfortable for the wonderful and socially distanced members who had turned out to support. The ladies pairs were contested by Gill Vernau; playing her first final, alongside skip and club secretary Jenny Ashman.

Up against them were the vastly experienced pairing of lead Jan Hartley and skip; also, club President, Jill Colbourn. Mocking the ugly conditions, it was Gill & Jenny who started beautifully and kept up the pace. Jan & Jill did their best, but they were certainly not helped by a heavy green and heavy rain. After 14 soggy ends the game ended, with Gill & Jenny very deserving winners by 27 shots to 2.

In his second match of the day Terry Urben was facing Dennis Martin in the 100-Up. In this format the closest bowl scores 4 points, next closest 3 points and so on down to 1. First to reach 100 points wins. Martin has been in exceptionally good form all season, but Urben has a decent record in this competition, with wins coming in 2016 and 2018 and the runner-up slot in 2019.

Today the early ends were even, but then Urben began to pull away, eventually winning by 102 points to 46 in 15 ends.

The rain of the opening day had thankfully relented, making way for bright sunshine albeit with a strong and at times chilly wind. First up in the 10am slot was the Junior Cup; nothing to do with age but reserved for those who have yet to win a competition at Marine Gardens. Here David Smith was ranged against Fixture Secretary Bob Cole.

The latter started strongly and moved into a commanding 13-1 lead. But Smith was undeterred and kept chipping in with some well-weighted shots. It looked for a time as if Cole was suffering a version of cricket’s “nervous nineties”, but he held his nerve and eventually closed out the match by 21 shots to 12.

Both players had displayed good bowls and temperament to match; it will be no surprise to see them back in a final next summer.

Also, in the morning session was the “Stan Wheeler Cup”; a three-bowl singles game contested by Ivan Godsmark and Terry Urben. Here too the former moved into a respectable early lead, but Godsmark pulled back and it became a genuinely close contest. The scores were tied on 12 and 14 apiece, but ultimately Godsmark finished strongly for a win by 18 shots to 14.

In the afternoon, a larger, but socially distanced crowd, gathered to enjoy the Mixed Pairs and the Men’s Championship Pairs. Firstly, in the Mixed Pairs husband & wife duo Jan & Bryan Hartley took on Leon White and club secretary Jenny Ashman. There was some impressive play by all four players, but Leon and Jenny garnered an early lead which they never relented.

Jan & Bryan kept plugging away and almost reached parity, but it was not to be, as Leon & Jenny emerged victorious by 29 shots to 14.

In the men’s pairs Shaun Coppard & Ivan Godsmark lined up against Noel Stevenson and Barry Cuckow. Once again there was some excellent bowling; much appreciated by the crowd. There is an old saying in bowls; front ends win games and back ends save them. This was neatly illustrated as Noel Stevenson arguably edged the battle of the leads, only to see his good work unstitched by Ivan Godsmark, either with a well-aimed running bowl or an accurate draw.

After 18 ends the scores reflected the run of play, with Shaun & Ivan winning by 18 shots to 6.

The final day of competition dawned bright and dry and the improved conditions brought out the best; socially distanced, crowd. They were rewarded with some excellent bowling and close games.

In the morning, the Veteran Singles was contested by Ivan Godsmark and Jenny Ashman. Godsmark was consistent throughout, but it was Ashman who kept delivering the telling bowl, drawing the shot on a regular basis, or playing with controlled weight to turn things to her advantage. Ivan was playing well, but still unable to slow Jenny’s momentum; the latter deservedly winning by 18 shots to 10.

At the same time, the final of the Drawn Handicap Pairs was being fought by Noel Stevenson and Terry Urben, up against Harry Tattersall and Barry Cuckow. Advantage lay with one pair and then the other; control of the jack and the length being played proving critical. Stevenson and Urben went into the 18th and final scheduled end 4 shots to the good: 19 to 15.

They should have been safe but the duo of Tattersall and Cuckow had other plans; Urben was unable to get anything close and so they garnered the 4 shots needed to square the score and force an extra end. With their star in the ascendancy Tattersall and Cuckow built a good head and eventually emerged as winners by 22 shots to 19 after 19 ends.

It was the closest match of the finals with plenty of twists and turns to keep the appreciative crowd entertained.  For their “never-say-die” attitude Tattersall and Cuckow were popular and relieved winners.

After a break for lunch the final matches commenced at 2pm. In the Ladies Singles Jenny Ashman played Frieda Goulding. Frieda is an experienced and very capable player, but this was Jenny’s fourth final in 3 days: eloquent testimony to her skill and determination this season.

Jenny started strongly and did not relent, winning comfortably by 22 shots to 6 in 17 ends. Frieda played gamely throughout but was up against the most in-form Marine bowler of 2020.

The Men’s Singles was between Dennis Martin and Terry Urben. The former started well and eked out a small lead, but gradually Urben started to claw it back. Two good ends for Urben proved pivotal en route to 21 shots to 14 win.

To comply with COVID guidelines a mass presentation of trophies at the end was avoided by simply handing out mementoes at the close of each session. Club President Jill Colbourn did most of the honours, assisted where needed by Club Captain Michael Ives. Club Treasurer Norman Deegan MBE kindly acted as umpire across all three days.

The finals were brilliantly orchestrated by Competition Secretary Steve Davis; his first year in post. Thanks, were given to the numerous club members who assisted with scoring and marking, including Vice-Captain Pauline Hughes.

And mention must also be made of the hardy spectators who supported throughout, often in most unfriendly conditions. They generated plenty of noise and atmosphere, for which all the players were grateful.

Marine Gardens BC has staged its internal competitions every year since 1931; the only break being World War 2. The club was determined that COVID-19 would not ruin that record, if possible, and in the end it did not. The club finals have never been held so late in the season; consequently, some days were miserably wet and cold. But despite that, there is a case for saying that 2020 will rank amongst the happiest and most impressive of the many finals staged. Simply for the fact that the club kept calm and kept bowling!

Members - Doreen Dickson, Mark Berriman, Sandra and Paul Baker - keen to watch members compete on all three days of the clubs' finals, were not discouraged by the adverse weather conditions. 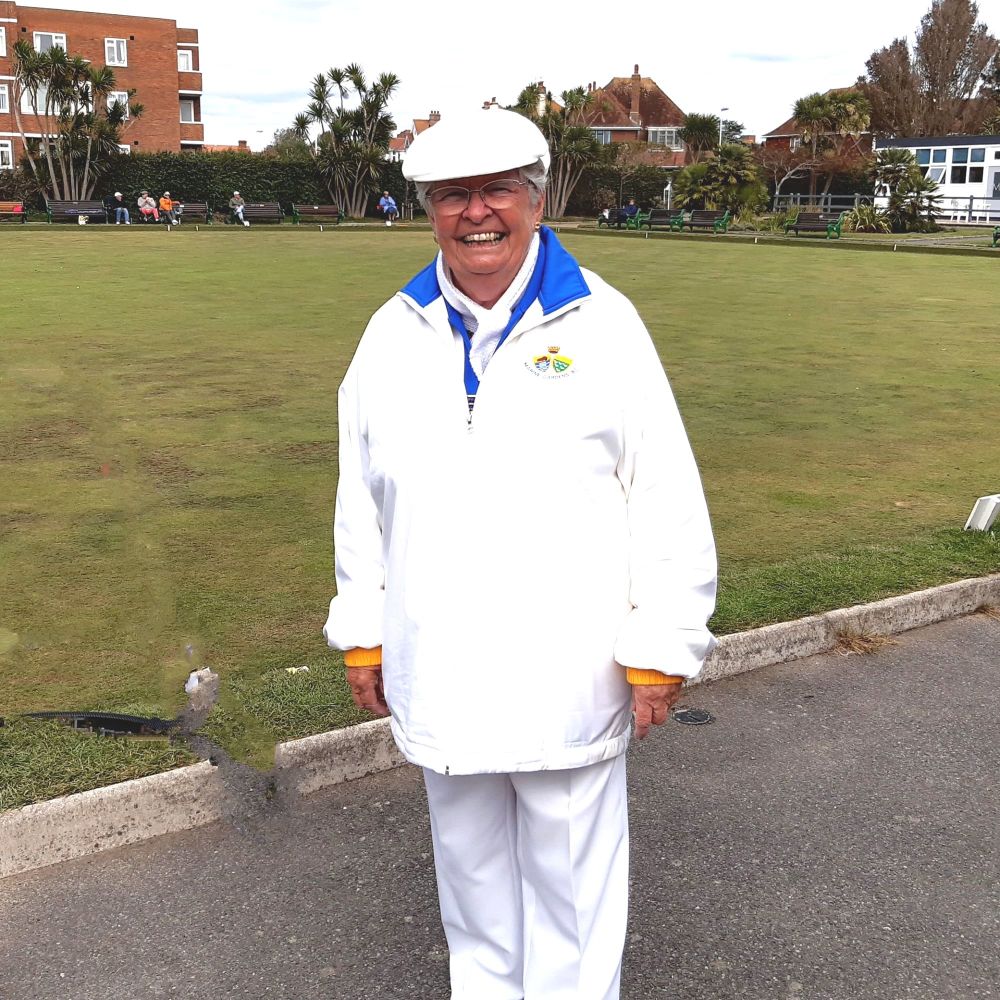 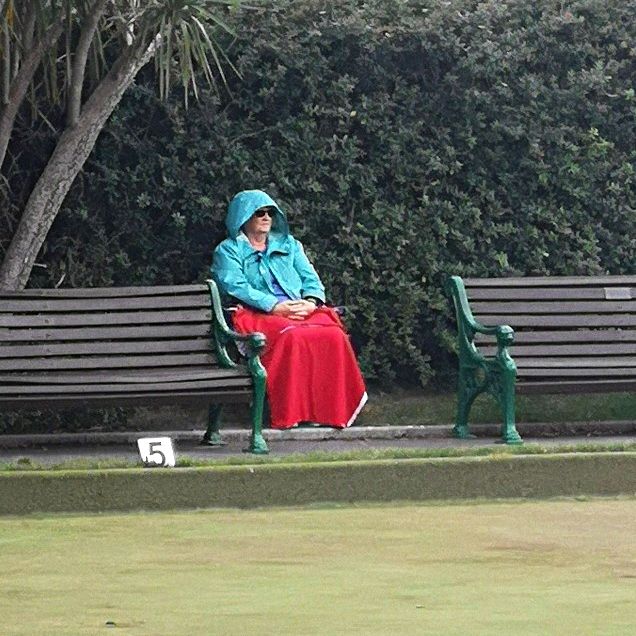 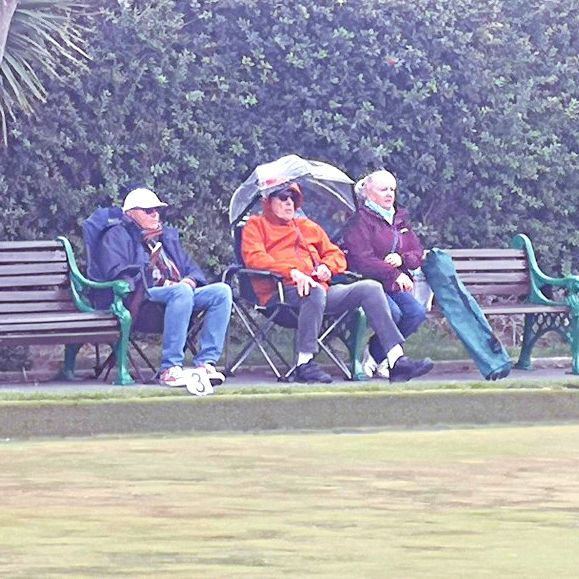