Monday 05/10 saw the final inter-club matches of the summer, with triples games played simultaneously at Marine Gardens and Goring Manor. Given the frequency with which these clubs meet we should not be surprised that Marine feel at home when visiting Goring Manor, and vice versa. And so, in the match at Marine Gardens the visitors ran out winners on all three rinks and by the comfortable margin of 56 shots to 37. The closest Marine came to a win was courtesy of Reg Perkins, Dave Muggeridge & skip Dennis Martin. They were ahead by 14 shots to 10 after 14 ends, but despite having about a hundred years bowling experience between them, they could not prevent the visitors collecting 1 or 2 shots per end. The result an agonising defeat by a single shot.

However, a short drive north in the delightful surroundings of Field Place, it was the visiting Marine team making the running. Having been drubbed here a week earlier, gnarly skip Mike Hitchin was not taking any prisoners! With staunch support from David Hughes and Steve Davis they established an early lead and kept it, eventually winning by 21 shots to 6. The trio of Len Tebby, Alan Paterson and skip Ivan Godsmark had a much closer game, but kept their nerve to close out a tight win by 17 shots to 15. Finally, the team of Roy Mills, David Smith and skip Bob Cole were ahead by 16 shots to 11 after 16 ends, but unfortunately conceded 5 shots across the last two ends as the hosts secured a draw. Overall, a win for the visitors by 54 shots to 37.

Across the two matches Marine Gardens tallied 91 shots; Goring Manor 93, so bragging rights sit with them until next spring. But only just!

In normal times the end of the season would be marked with a closing drive; 48 players on the green, home-made cake, and tea in the clubhouse. Fun all-round. Of course, these are anything but normal times and so across the weekend of 10 and 11 October Marine Gardens played four internal drives. Almost sixty different members turned out and while there was a sad absence of tea & cake there was plenty of fun. In the early spring no one knew if a single bowl would be delivered during the outdoor season. Permission to play eventually came from the government, alongside plenty of COVID safety measures from Bowls England.

These were adhered too throughout and on 1st June the first tentative players took to the green. Several members remained understandably cloistered, but gradually the numbers resuming play escalated. By season’s end 78 different members had appeared; 18 friendly matches against 6 different clubs were played. Only three wins were bagged but that is irrelevant given the pleasure and sense of normality which ensued from simply playing the game.

The last time Marine Gardens failed to play club competitions was 1944. Would the 2020 comps fall into abeyance, or perhaps only a token number be played? No. We played all 12 comps and nearly 50 members enjoyed the good-natured contests. Perhaps most astonishing of all we recruited over 10 new members with several other keen candidates lined up for next year. Every member who re-joined; every member who played, helped the club to get through an anxious and difficult season. However, special thanks must go to Steve Davis, who in his debut year as competition secretary orchestrated a full hand of competitions without a glitch. And David Hughes, who volunteered to run the off-site rink booking system necessary under the COVID guidelines. He fielded over 800 rink requests by phone, email & text; also finding time to match up members seeking company for a roll-up. The season would have been impossible without his tireless work.

No one knows what 2021 will bring, but wherever possible Marine Gardens BC is resolved to bring normality, friendship and fun, via the great game of bowls.”

View of the final Sunday afternoon play, from the clubhouse. 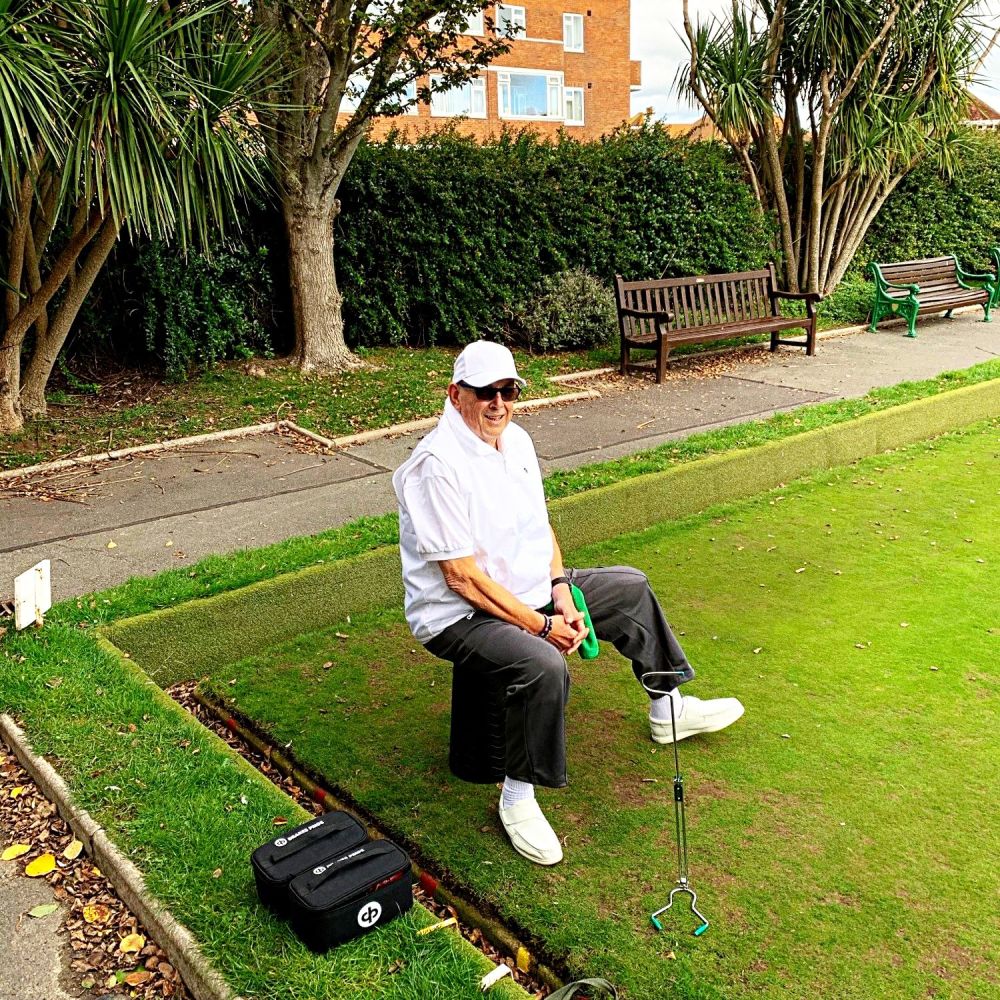 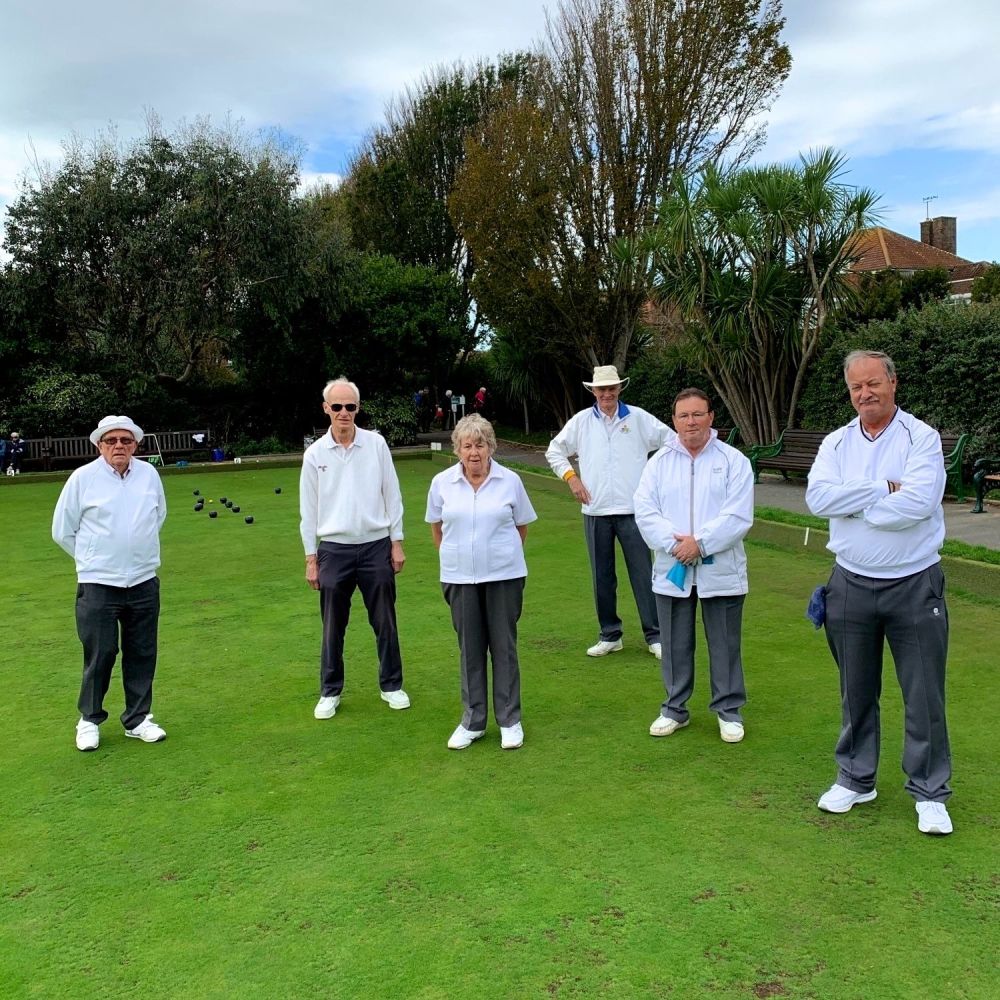 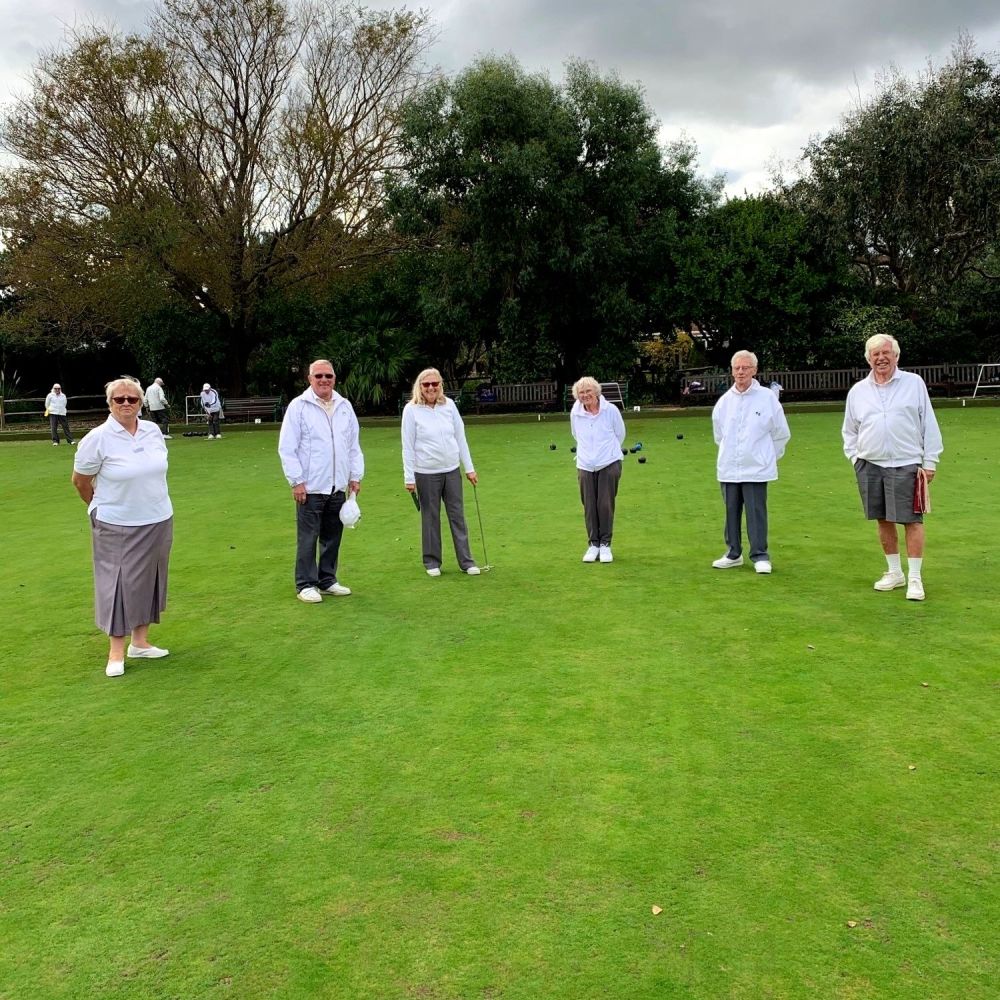 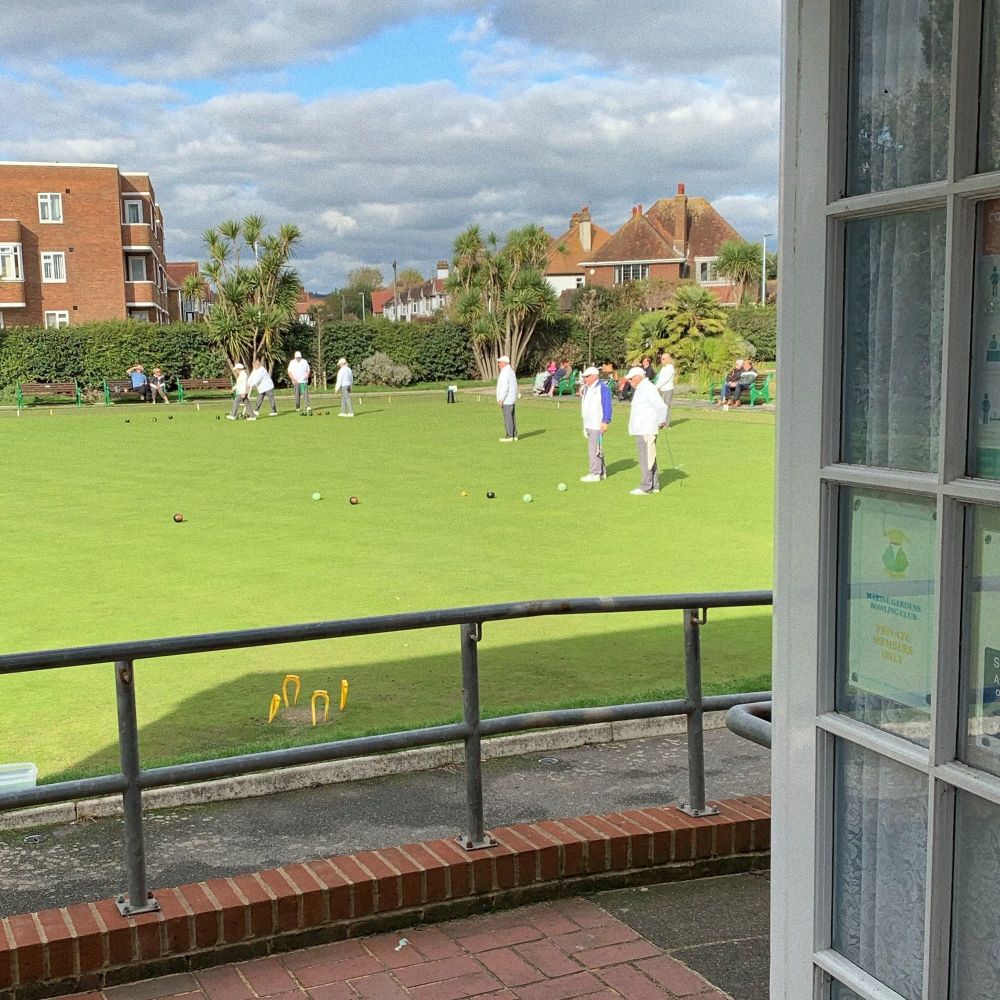