Having lost the previous week to Pavilion’s A team, the Marine side returned to Pavilion for a Brodie Tray match against the host’s B team. A defeat ensued with Pavilion victorious on three rinks, but Marine did snaffle a nail-biting win in the pairs game.

Laurie Bradley and skip Ivan Godsmark were 14 shots to 10 down after 12 ends but fought back twice to equal the score: 14 all after 15 ends and 15 all after the 17th and penultimate end. With all to play for on the 18th and final end it was the Marine duo who held their nerve. 3 shots garnered and a breathless win by 18 shots to 15.

The trio of Albert Leatham, Tim Baldwin and skip Dennis Martin were behind throughout; 27 shots to 6 after 14 ends, but they kept swinging in the closing ends and picked up some deserved shots. Final outcome a defeat by 29 shots to 15.

The second trio of Alan Paterson, Dennis Crossweller and skip Mike Hitchin had a much more equitable duel with their opposite numbers. The score was tied on 11 shots apiece after 10 ends, but the hosts dug in well and scored strongly on the closing ends on route to a win by 22 shots to 12.

The sole fours rink: comprising Steve Davis, Liz Baldwin, John Nettleingham, and skip Pauline Hughes kept things tight and did win 8 ends. However, the hosts always had their noses in front and eventually won by 19 shots to 14.

Overall outcome was a strong win for Pavilion B by 85 shots to 59, but the visitors did bag a win in the pairs and were much more competitive across the piece.

Thursday 20 May and Marine were hosts, welcoming Henfield to a not so sunny Worthing as dark clouds, strong winds and persistent rain made bowling a miserable experience. It was a social game of four triples and the home trio of Roy Mills, Shaun Coppard and skip Dave Mugridge enjoyed a good win by 16 shots to 10.

On two other rinks play was very tight, but the visitors just edged it.  Dave Holden, Harry Tattersall, and skip Dennis Martin lost by 13 shots to 16, while Pamela Chambers, Gerry Perch and skip Jenny Ashman lost by 12 shots to 16. However, across those three rinks Marine were only behind by a single shot.

Unfortunately, the final trio of Noel Stevenson, Alan Paterson and skip Michael Ives ran across stiff opposition. The hosts found themselves down by 14 shots to nil down after 6 ends and could not recover despite their best efforts. The final tally was a defeat by 23 shots to 6 and that powered Henfield to overall victory by 65 shots to Marine’s 47.

Saturday 22/05 saw Marine’s first match in their 2021 West Sussex Bowls League (WSBL) campaign. Given ongoing COVID issues the league has altered the playing format; 4 sets of triples instead of rinks, no promotion or relegation.

The game was away at Petworth; lovely setting and a hospitable crowd, but their artificial green always presents a stern technical challenge to visiting teams. Quick paced and with plenty of swing it is basically like playing indoors, only with wind and sometimes rain to contend with as well! The Marine 12 knew what to expect and applied themselves well, but unsurprisingly the hosts had the better of the contest, winning on all four rinks and by a margin of 92 shots to 44.

Sunday 23/05 and Marine Gardens made the short trip to East Preston for another West Sussex Bowls League (WSBL) match. After the tribulations on the artificial green at Petworth just 24 hours earlier, it was a relief to be back on grass! East Preston B team have some experienced players, but then so do Marine and they brought all their skills to bear with an excellent group performance.

Leading the way, in all senses, was match captain Bob Cole. Playing as lead with John Nettleingham at two and Ivan Godsmark skipping, Cole enjoyed a terrific afternoon. His constant accuracy was described as “machine like” by the home trio who could only win two of the eighteen ends played. With Bob leading the line the Marine trio romped home by 43 shots to 4.

Also in the winner’s enclosure was the triple of Leon White, Terry Ashley & skip Norman Deegan. They were 12 shots to 3 down after 8 ends, but suddenly found their mojo and with it 19 shots over the next 10 ends. Final result was a strong win by 22 shots to 13.

Alan Paterson, Dave Mugridge & skip Mike Hitchin enjoyed a good battle with their opposite numbers. The scoring was always tight, but the home side hung on to win by 19 shots to 15.

Finally, the triple of Noel Stevenson, Phil Floyd & skip Steve Davis were always at the races; the scores being tied on 11 apiece after 11 ends. However, it was the home side who rallied and finished with a deserved win by 19 shots to 12. However, overall success went to the visiting Marine team by 92 shots to 55. 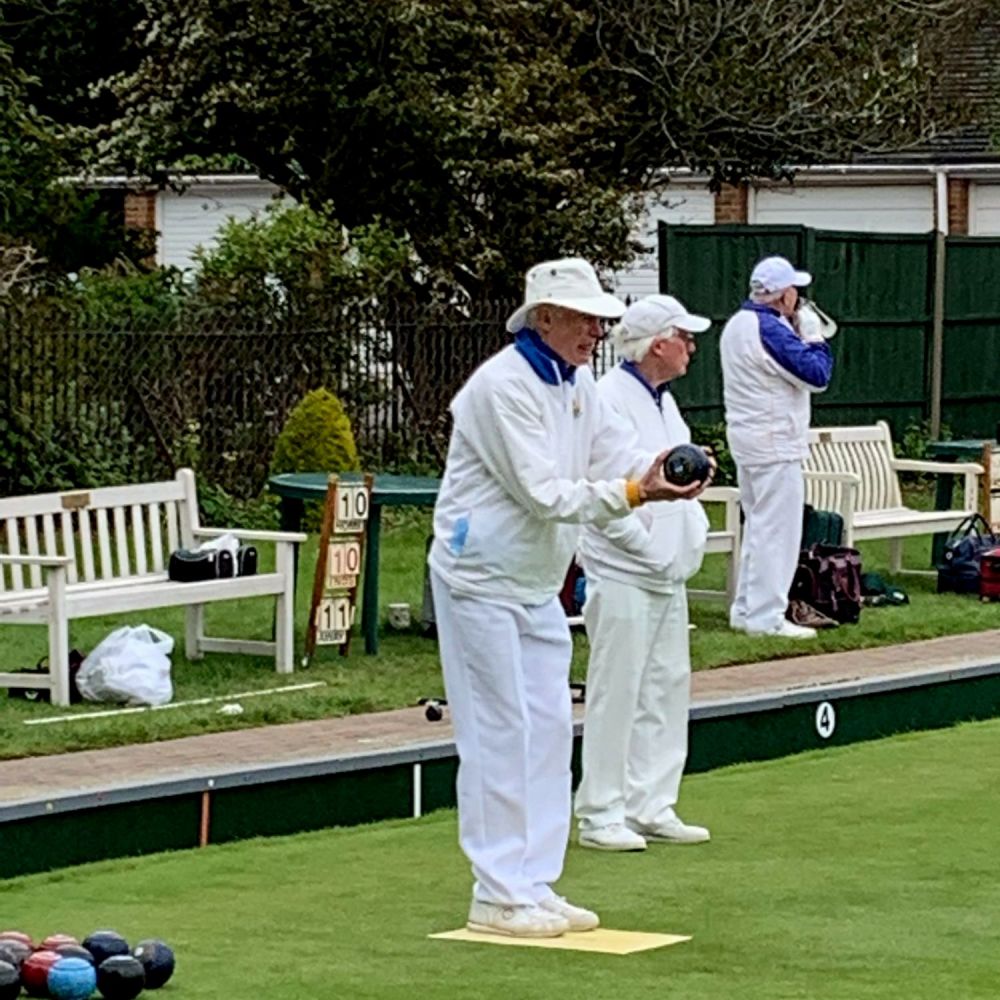 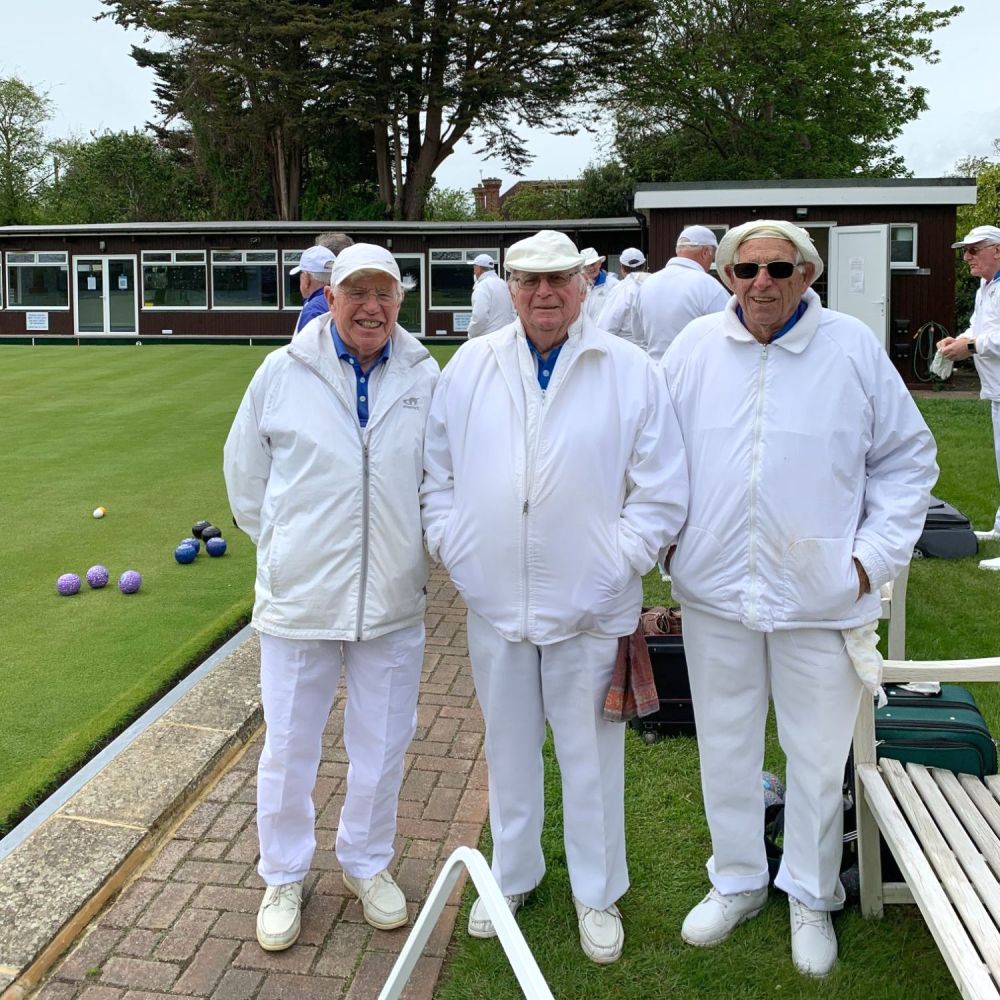 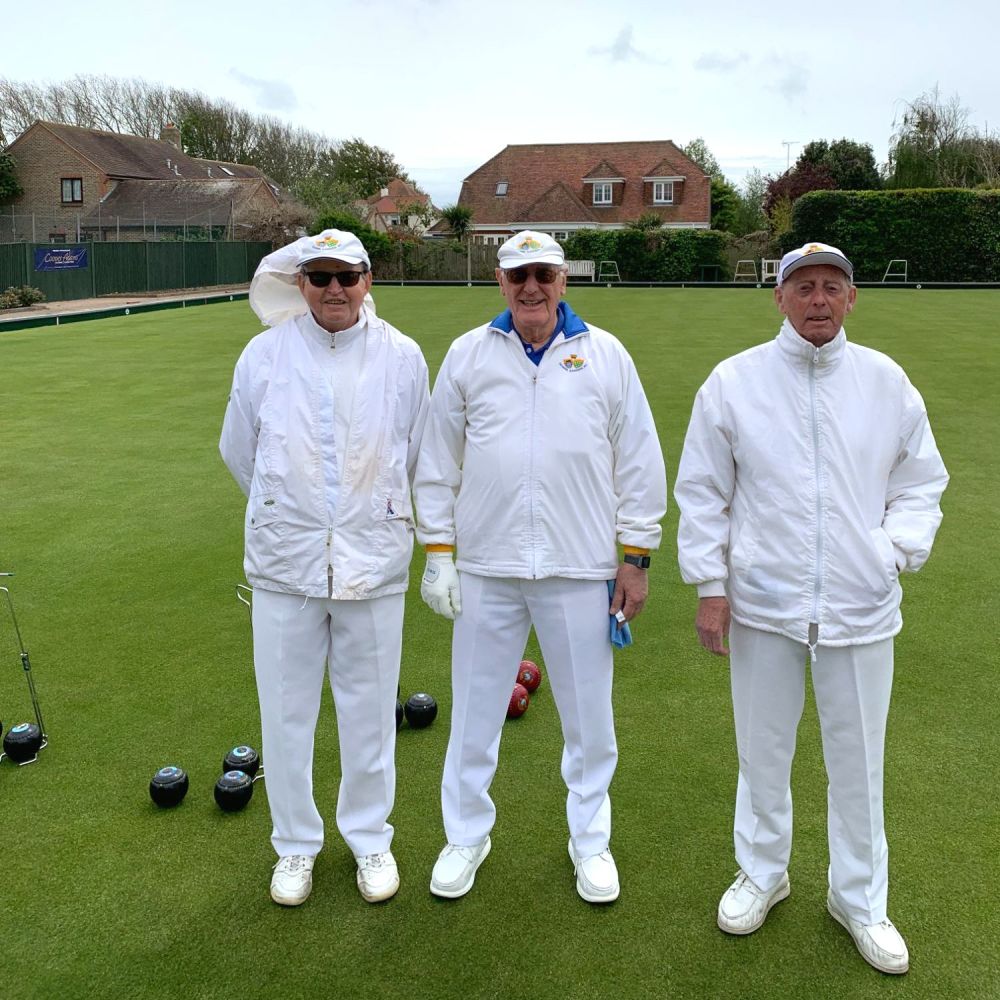