A busy week of bowls began for Marine with a short trip to Worthing Pavilion, this time to play an evening friendly against Grasshoppers BC. The Grasshoppers comprise retired police officers / support staff and Pavilion is their customary base.

The weather was oh-so-typical for this May; cold, wet & miserable. Thankfully, the bowls was played in a warm spirit although persistent rain did curtail proceedings. The hosts tried hard but were unable to arrest the progress of a keen Marine team. The visitors showed a clean pair of heels and won on all three rinks.

Top rink on the night went to Paul Baker, Terry Urben & skip Ivan Godsmark, who won by 13 shots to 4. Next came Roy Mills, Dave Mugridge & skip Mike Hitchin; victorious by 16 shots to 9. Finally, Sandra Baker, Albie Marsella & skip Dennis Crossweller won by 17 shots to 11. A good overall win for Marine by 46 shots to 24, but Grasshoppers have their particulars and will be seeking a retrial later in the season – when hopefully the sun remembers to shine!

Wednesday 26/05 and Marine made the trip to Hassocks, where a friendly game of 4 sets of triples awaited against Adastra BC.  Home advantage proved non-existent for once as the visitors ran out winners on all rinks, albeit two of them were close affairs. Top rink went to Terry Ashley, Shaun Coppard & skip Harry Smith who dominated throughout and won by 25 shots to 6.

Sandra Baker, Liz Baldwin & skip Dennis Martin also enjoyed a comfortable win by 19 shots to 9. Things were less certain for Paul Baker, Tim Baldwin & skip Mike Hitchin; ahead by 12 shots to 5 after 12 ends they saw their hosts rally and at the last end only a single shot separated the teams. Fortunately, Marine scored a shot and secured a 15 to 13 win.

Finally, Steve Davis, John Nettleingham & skip Jim Gray had a tight game, being locked on 10 shots apiece after 12 ends. However, it was the visitors who dug in and bagged a win by 19 shots to 14.

Thursday 27/05 and Marine were on the road once more, this time to Lancing for a Stracey Shield match comprising 3 rinks of 4 players. The Lancing green was in good nick and a fair test for both teams. This time local knowledge and experience counted as Lancing won well on two rinks.

The solitary win for Marine came courtesy of Keith White, John Nettleingham, Dave Mugridge & skip Terry Urben. Down by 9 shots to 1 after 5 ends they found a foothold in the game and went on two good scoring runs, punctuated by half-time tea & cakes! Final result was a win for the visitors by 23 shots to 17.

The rink of Jenny Ashman, Dennis Crossweller, Alan Paterson & skip Michael Ives were in touch after 12 ends, but the hosts scored steadily in the closing ends and deserved their win by 22 shots to 9. Finally, Steve Davis, Albie Marsella, Leon White & skip Ivan Godsmark ran into tough opposition, but they were only a shot behind after 16 ends: 14 to 15. However, it was the hosts who enjoyed the better of the final ends and nabbed a win by 22 shots to 17.

Friday 28/05 and Marine’s fifth away game on the bounce, this time across at East Preston for a friendly consisting of 5 rinks. Club Treasurer Norman Deegan skipped the sole winning rink for Marine, a fine win by 32 shots to 17 with sterling support from Albert Leatham, Philip Floyd & Liz Baldwin.

The next closest rink was Mary Etherington, David Who, John Dorkings & skip Jim Gray who sadly managed to pull defeat from the jaws of victory. It was an excellent tight game throughout, but after 16 ends Marine had their noses just ahead: 14 shots to 13. On the 17th and penultimate end, it all went awry as the hosts garnered 5 shots, the single largest haul of the afternoon. Jim & Co scored 1 on the final end, but it still meant defeat by 18 shots to 15.

The other two rinks; skipped by Harry Smith and Jenny Ashman lost by 12 shots to 23 and by 9 shots to 19, respectively. A very enjoyable afternoon at East Preston and a strong overall win for the hosts by 102 shots to 76.

Saturday 29/05 and Marine were finally back on home turf; a Brodie Tray match against near neighbours Goring Manor. The rink of Wendy Wilson, Sandra Baker, Paul Baker & skip David Sayers had a good win by 19 shots to 13, having been all square on 13 shots apiece after15 ends.

In the pairs game Albert Leatham & Steve Davis played well and reached parity; 13 shots apiece after 14 ends. Sadly, they did not score again as the visitors won all remaining ends and the game by 23 shots to 13.

Both triples found the going hard. Pamela Chambers, Roger Parrish & skip Harry Smith lost by 10 shots to 33. Paula Seymour, Mark Berriman & skip Jenny Ashman lost by 9 shots to 23. Net result was an enjoyable afternoon of bowls played in warm sunshine, and a good win for the visiting Goring Manor by 92 shots to 51. 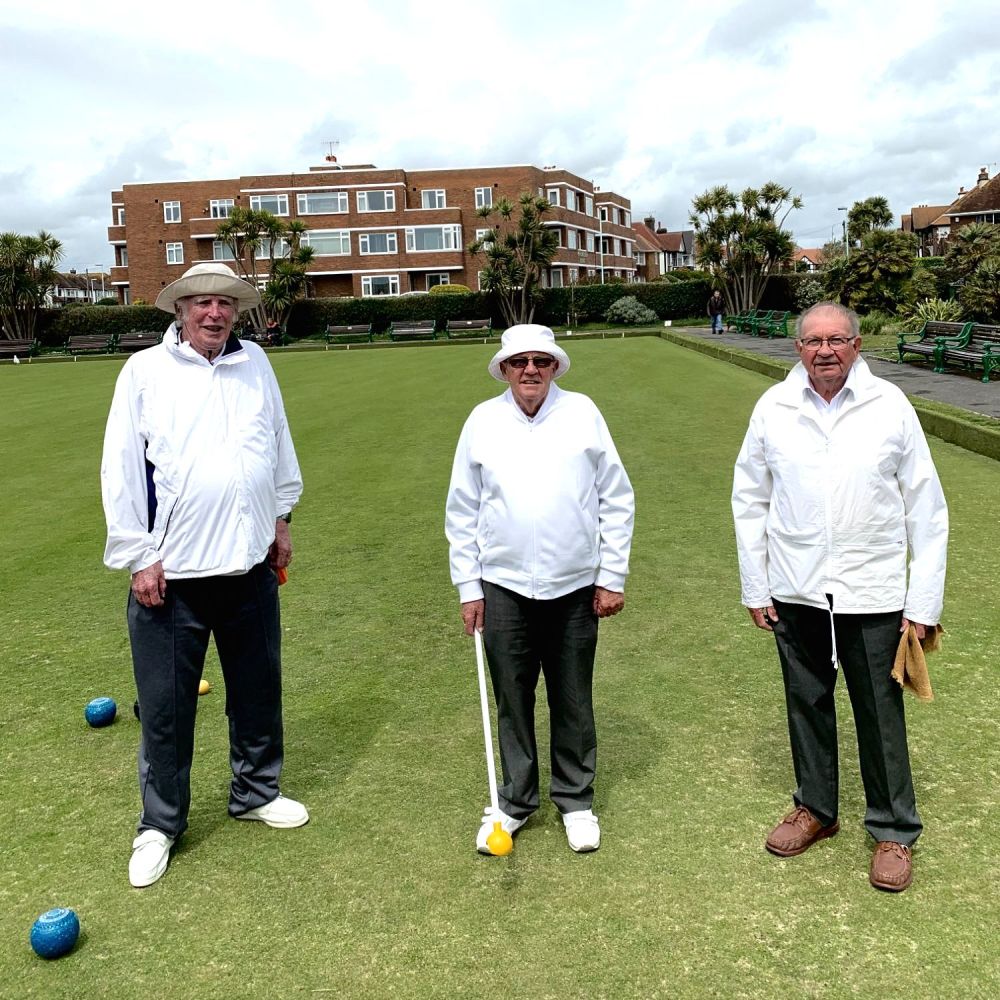 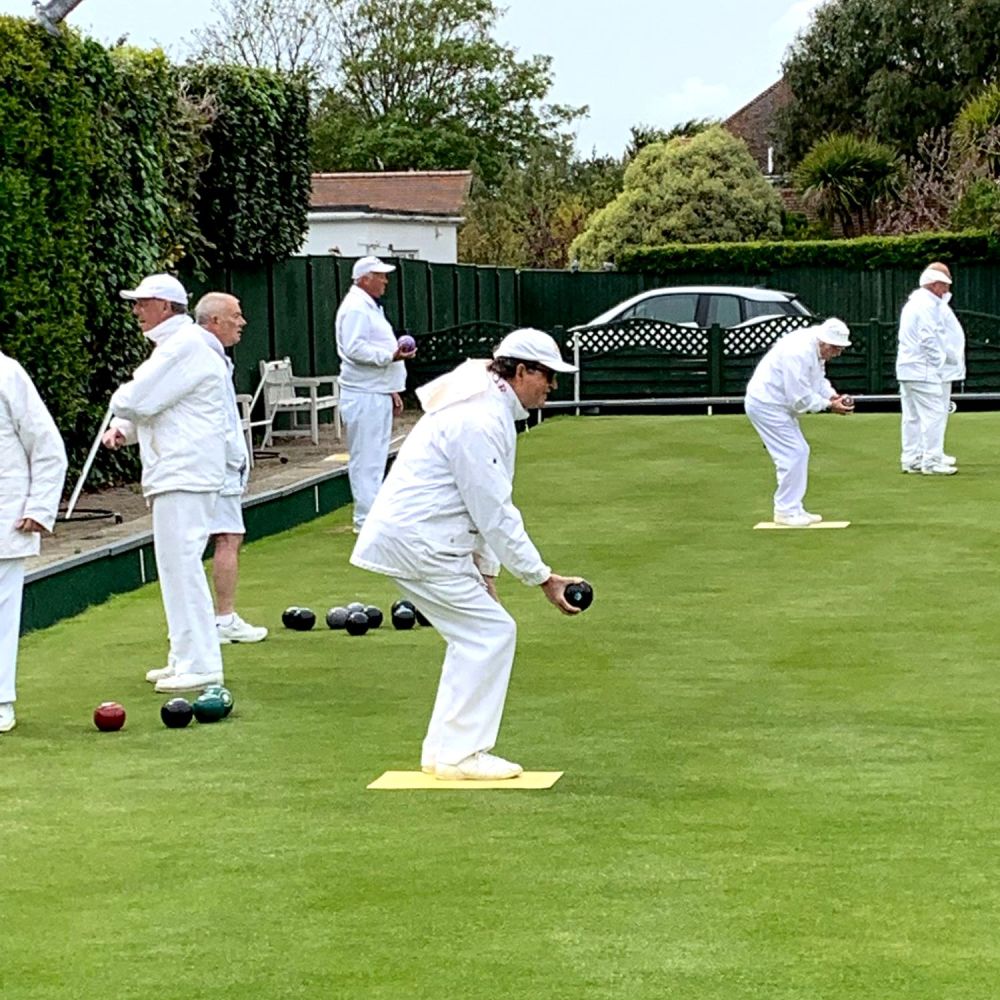